Onward Search is really psyched to sponsor the upcoming CSS Off Competition by UnmatchedStyle.com because frankly, competitions like this don’t happen every day. In case you haven’t signed up already, the markup excitement doesn’t officially start until October 20th, so there’s still plenty of time to step into the ring! This front-end throw down for developers and designers is an outstanding opportunity to show off your skills and win cool prizes, but at the same time, it’s so much more than that. 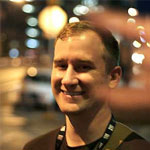 Jason Beaird – UX Design(elop)er, author of The Principles of Beautiful Web Design and CSS Off Judge

I wanted to get the full picture of the competition, so I got in touch with CSS Off judge Jason Beaird. Jason is a UX “Design(elop)er” at MailChimp, is author of  The Principles of Beautiful Web Design, and loves sharing his passion for all things web with others. That unique title is the result of Jason not wanting to be pigeonholed as just a web designer, UX designer or front-end developer. He’s a big fan of the intersection between design and development, which is at the core of CSS Off. Here’s what Jason had to say about it:

Why is CSS Off so important/beneficial to the front-end development community?

Jason Beaird: When the 1st edition of Jeffrey Zeldman’s Designing with Web Standards came out in 2003, everyone who was designing for the web knew they were working with a medium that was constantly in flux. Once web standards caught on and became the norm, the process of converting a design to front-end code became fairly straightforward. Over the last few years though, typographic enhancements, browser evolution, device diversity and even fundamental upgrades to HTML and CSS have made designing for the web a lot more challenging. The CSS Off not only highlights those challenges but also provides a stage for experienced and budding web professionals alike to show how they’ve adapted to today’s web landscape.

What makes CSS Off so good for the careers of the developers and designers involved?

JB: Aside from the lure of some terrific prizes, the CSS Off does today what Dave Shea’s CSS Zen Garden did during the dawn of the web standards movement. It gives participants real-world experience and showcases their creativity, skill and knowledge of the latest trends and best practices. If you’re looking for work, this could certainly be a portfolio booster and if you’re a seasoned pro, it’s a way to show you’re still on your game.

Beyond the rules and criteria detailed on the competition website, what are you and the other judges looking for in a winning entry?

JB: I’ve always believed that writing front-end code is as much a creative activity as it is a logic exercise. The design that the Paravel team has created for the competition is beautiful and fun. As with any Photoshop comp though, there’s plenty of room for design decisions to be made. The judging criteria for the technical aspects is pretty well defined so I’m sure that creativity and originality within the constraints of the mockup will prevail.

If you met someone who was on the fence about signing up for CSS Off, how would you encourage them to participate?

JB: I would tell them to forget about the prizes and to do it for the personal achievement. Like running a 10k or learning a new skill, this competition is a great way to test your fortitude and boost your self confidence. You really have nothing to lose but a little time. Turn off the TV and devote a couple evenings to writing some front-end code that you can be proud of. If you look at it this way, winning that MacBook Air would just be icing on the cake.

What are your favorite sources of inspiration, especially those you’d recommend for someone in the competition?

JB: There are so many things competing for our attention on the web that it’s often hard to filter inspiration from noise. For that reason, I love seeing how traditional design practices are making their way to the web. Along those lines, Bearded Studio’s Wood Type Revival, Dana Tanamachi’s chalk lettering and even the local architecture (both old and new) here in Atlanta have given me inspiration lately. I’ve been trying to keep track of things that inspire me visually on Pinterest. Other than that, I follow lots of brilliant people on Twitter and enjoy getting Unmatched Style’s “Quick Dose of Inspiration” emails each month. Will any of those things help you code the CSS Off comp better? Not directly, but finding things that inspire you visually will give you a better sense of design and that will most certainly make you a better front-end dev as well.

I hope all this extra insight has convinced you to put your markup skills where your mouth is and enter CSS Off! Everyone here at Onward Search can’t wait to hear about all the amazing entries so make sure to get yours in. If you’re in the market for a web design, or web development job, we can’t wait to talk to you about too. Apply today and the Onward Search recruiters will help you build your own “Design(elop)er” career!